The broom is also called a broom by us. It is a tool used to sweep the floor and remove dust in our lives. The application of the broom has been recorded since ancient times. Although there are more and more modern sanitary cleaning tools, the status of the broom has been gradually lost, but it is undeniable The broom is still an important milestone in human history. There are many brooms made in modern industry, but in the countryside there are still many bamboo brooms made by themselves, also called bamboo silk brooms. Let’s introduce the manufacturing process of bamboo silk brooms!

Moso bamboo twigs (you can fetch it while cutting moso bamboo, tie it into bundles and ship it home)

There is a soil stove for the anti-lidden pot, the pot is broken, there is a hole in the middle with a large bowl, a bamboo knife, and a flat stone.

Break off the small branches from the bamboo branches by hand, and tie a small branch with the warped part as the standard, each 4 small branches, with a large branch. The larger one is about the size of two smaller ones, and the silk can be slightly longer.

Ignite it with garbage under the anti-boiler (attachment), the flame jumped out from the hole in the bottom of the pot, and the other hand that the pamper took the small bamboo silk spinning on the flame to extinguish the fire, trying to rely on the softness of the roast until the leaves Reduce, until the bamboo silk becomes soft. Going to the next step, the fallen leaves can be used to bounce (roast) bamboo filaments for fuel.

Saw the moso bamboo into a handle of 1 meter to 2 meters, leaving a branch at the tip, about 15 cm long, tilted up like a thumb, and shaved the other side of the finger. Keep it consistent. In addition, do some tendons (split), one end is flat, the other is flat, and one inverted branch is left on the flat.

Except for the very thin red vines that can be used alone, they are generally torn in half, as long as they are short. When tearing, cut a knife from the side, split it evenly from the face with your hands, grab a piece with one hand, and tear to the root. Red vines are easy to tear, and generally do not skew sideways. After tearing it up, put it in water or a damp place to prevent it from drying out.

Use a piece of red vine to tie the middle of the large bamboo silk first, then take the broomstick, insert the elbow into the bamboo silk bundle, step on the other end of the red vine under the foot to help tie it tightly, and then hold the bamboo silk with the handle and stick it. Wrap it around the body, and wind it 2-3 times, then pick up the second bundle of small bamboo silk, close to the outside of the original bamboo silk, wrap the same loop three times, take the second bundle, the fourth bundle, and the fifth bundle. , Until the five bundles are wrapped tightly and unwaveringly. In the process of pasting and winding, each new bundle is placed two or three fingers back than the original one, and the pasting direction is the same, forming a flat knife shape. Red vines can be connected if they are short, and they can be twisted without knotting to keep them smooth and beautiful.

After tying, wrap the rattan head around the tendons, use a bamboo knife to nail the tendons into the bundle, make it tighter, and then saw the untidy messy bamboo tails flat.

8. Rest, press and form, and can be sold after bundling.

The above is the manufacturing process of the bamboo silk broom, I hope it will be helpful to everyone! If you want to learn more about broomsticks, you can pay more attention to our official website. If you have a wholesale ordering demand for brooms, you can contact us directly! 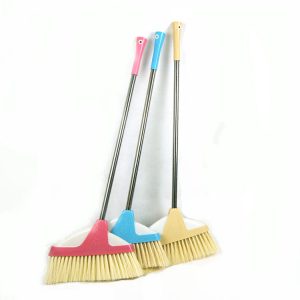