How to make a broom

main ingreadient
The raw materials for brooms include sorghum spike, golden silk grass, bamboo shoots, broom grass, etc. Households are usually plastic brooms.
Use loose-headed sorghum broomsticks for small-headed or large-headed pipe brooms, smash the grains, remove the leaf sheaths and the nodes under the arrow shaft, and then combine the scattered heads with the broom
Naochiho (with a hard core in the middle) separates, pick out the broomsticks with loose ears, and make the outer skin when tying the broom, and Naochi’s broomsticks as the skeleton. Then, use a hand knife to break the middle-scattered arrow stalk used for the selected outer skin into two halves. Cut the arrow stalks of straight chiho to be used as broom cores from the root of the head of the ear. The cut arrow stalks can be used for stringing curtains, and the middle of the broom handles can be filled with ordinary stalks. Then spread the finished broom millet flat on the hard ground and roll it with stone roller until it becomes soft. Then moisten the broomcorn millet with water (place the broomcorn millet in a tank with water or dust it with water) for about 1 hour.
Prepare the utensils to tie the broom. It takes 0.5 kilograms of millet and 700 grams of iron wire to make a broom. Take a four-meter-long oil steel wire rope with a thickness of 3 to 5 mm, and tie one end to a foot or door frame in the house, and the other end to the middle of the walking pole. A rubber belt with a width of 7-10 cm and a length of 80-90 cm is tied to the back of the walking pole, and the other end is connected to one end of the walking pole by a hook that can be hung and removed. When tying the broom, tie the walking stick around your waist, take 3 to 4 core broomsticks, then take 4 skin broomsticks, clip one as a straw, tighten with oiled steel wire, and press in 22-25 gauge iron wire. In the first one, the wire is looped twice in each one. In the second course, take 4 core minced seeds, 2 skin minced seeds, and 1 stalk, followed by the first course. Lefa is the same as the first course. The third and fourth paths are the same as above. The fifth is the last one. Take 4 stalks and 1 stalk, add four stalks on each side, and strangle them twice, and then take one every 3 to 5 cm upwards. A total of 15 to 17 courses. The scraper will peel off the husk of the tied broom. In order to make it bright, white and mildew-free, it needs to be sterilized by sulfur fumigation. The method is to dig a half-meter deep pit in the ground, put a piece of sulfur in a bowl or iron box, use wooden sticks and other blocking frames on the pit, and put brooms across the frame, the number can be more than a hundred. Cover it with a plastic sheet, and after igniting sulfur, it can be sold after fumigating for about 1 hour.
Process flow
Material selection→drop off the kernels→remove the leaf sheaths→lay flat on the ground after sorting→soften→dust and moisten→tighten the knot→remove the husk→sulphur fumigation→finished product. 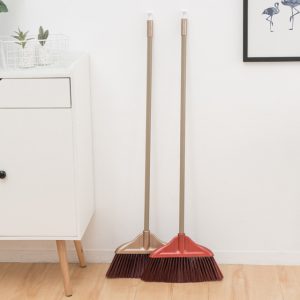 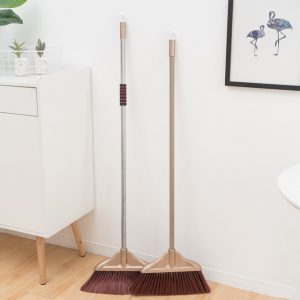